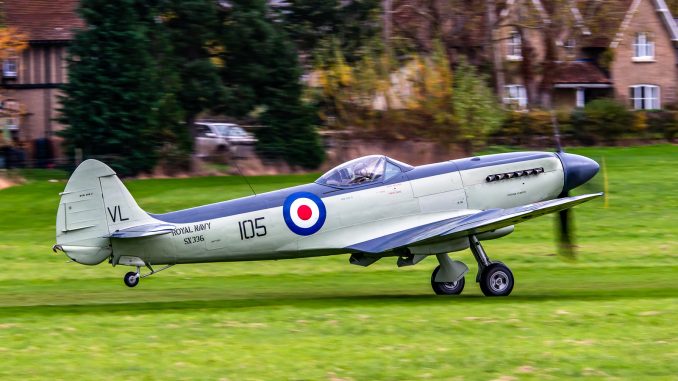 A beautiful profile shot of Seafire Mk.XVII SX336 during her take off run at Old Warden on November 18th, 2021. (photo by George Land)

As many readers will know, Supermarine Seafire F. Mk.XVII SX336 made her first flight for several years on November 18th, 2021, following a period of extensive maintenance at Old Warden in Bedfordshire, England. The aircraft, a navalized variant of Supermarine’s legendary Spitfire, is one of just a handful of the breed extant. We contacted the aircraft’s longtime owner, Tim Manna, to learn a little more about this magnificent aircraft, but before we get to his side of the story, here are a few details regarding the aircraft’s history…

While Vickers-Supermarine created the design, the entire production run of 232 Seafire Mk.XVIIs was manufactured under license, with Westland Aircraft Ltd. building 212 examples – including SX336 – at their factory in Yeovil, Somerset (Cunliffe-Owen built the other 20). SX336 rolled off the production line at Yeovil on April 30th, 1946, with the Royal Navy’s Fleet Air Arm formally accepting her on May 3rd that year. Her time as a front-line fighter was short-lived, however; more potent Seafire variants were already in the pipeline, but the introduction of Hawker’s superlative Sea Fury in August, 1947 soon eclipsed them all. Needless to say, following a period of activity with Naval Reserve squadrons, SX336 was relegated to ground-instructional duties by May, 1950. 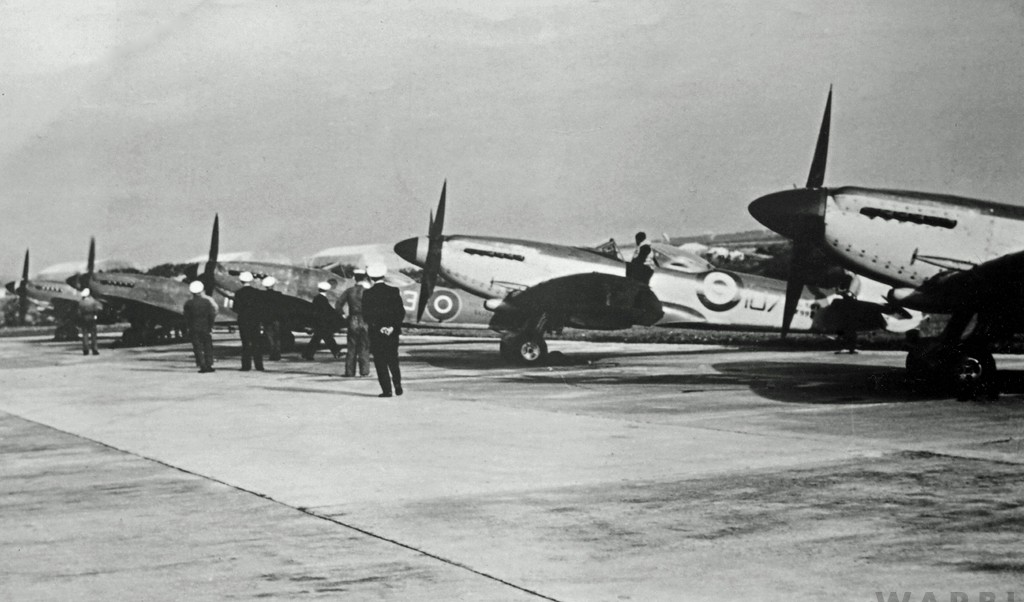 Supermarine Seafire F.Mk.XVIIs of No.1831 Squadron Royal Navy Volunteer Reserve at RNAS Stretton during 1950. SX336 saw out the last of her days in the Royal Navy at this air station in Cheshire. (image via Wikipedia)

The Royal Navy placed SX336 in storage at RNAS Stretton near Warrington, Cheshire during 1953, but May 1955 found the fighter disassembled in a local scrapyard operated by Joseph Brierley and Son, alongside several other examples of her brethren. And there her story should have ended – as it did for most other surplus military airframes of the day… however, SX336 caught a lucky break during 1973 when the well-known Spitfire historian, Peter Arnold, recovered the Seafire’s battered fuselage from the Warrington scrap yard. He also retrieved the significant remains of Seafire F.Mk.XVII SX300, and other relevant components from the same source. SX336 entered long-term rebuild with a new owner in 1978, but it would be many more years before the aircraft began to resemble a Seafire again. Tim Manna acquired the project on November 21, 2001 – exactly 20 years prior to these words being written – and it was under his ownership that the Seafire’s restoration really began to blossom. We will let Tim Manna pick up the (gently edited) story from here… 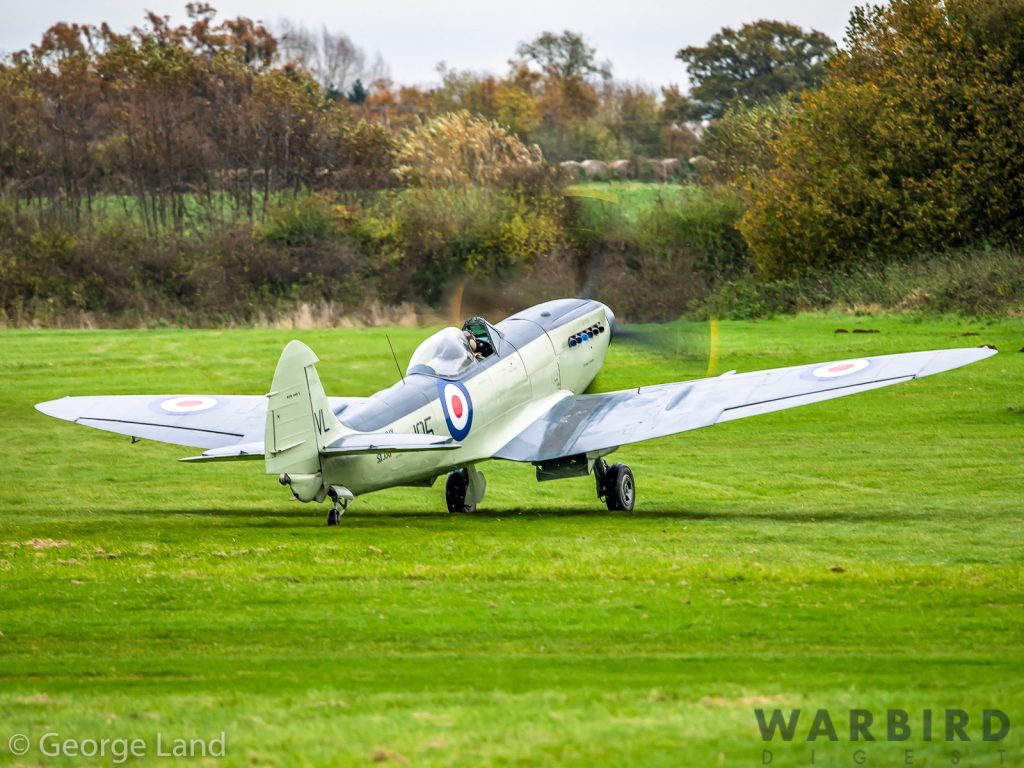 SX336 has made several test flights since this image was taken. The aircraft will make a welcome addition to the air show circuit in Britain next season. (photo by George Land)

The Rebirth of Seafire SX336

The aircraft made her first post-restoration sortie on May 6th, 2006, taking off from North Weald… exactly sixty years to the day since her maiden flight in Yeovilton with Westland production test pilot John “Tommy” Thompson at the controls. Rather fittingly, Thompson was on hand to witness the event!

After her initial test flying, ‘336 received her Permit to Fly. She flew beautifully on the air show circuit for a number of years. Unfortunately, she suffered a gear-up landing in France during 2011. We brought her back to North Weald for “repairs and restoration” and she again flew in 2012 – continuing uneventfully and elegantly until 2016.

In 2016, ‘336 began her “Ten Year MOT” – that is to say, that every ten years the Civil Aviation Authority (CAA) requires the owner/maintenance company to perform a major inspection of the aircraft, including wings off, spar and undercarriage, Non-Destructive Testing, etc. (I believe as there is no “design authority” for Spitfires, the CAA requires civilian Spits and Seafires to follow the Royal Air Force’s Battle of Britain Memorial Flight maintenance schedules, of which this is a part).

This effort started with Kennet Aviation at North Weald. Unfortunately, the maintenance team found cracks in the firewall of Frame 5, the heart of every Seafire/Spitfire. This is not unusual for Spits and/or Seafires, hence the CAA requirement for regular in-depth inspections of the breed. Therefore we now needed to build and fit a new Frame 5 to the existing fuselage and wings, etc. The aircraft’s accessories, pipework, plumbing, etc, also had to be refurbished or replaced, but thankfully most of these items could “go again” – it was still a pretty big job though.

With SX336 in so many pieces, we decided that it made sense to give her every inspection available… so we did. The propeller went off for overhaul, since it was already close to needing one. The engine also came out for inspection. The wings came off for a detailed inspection, as did the undercarriage, canopy, ailerons, elevators, rudder, fuel tanks, oil tanks, flying control cables, etc. It truly looked like anAirfix model kit at this point, with all the parts sitting on shelves waiting to go back in. Although nothing major was found, other than the cracks in Frame 5, there was still a lot of work to do.

Unfortunately (fortunately?), at that same time Kennet Aviation had lost its lease at North Weald and relocated to Old Warden Airfield, also home to the Shuttleworth Collection (a blessing in disguise!!). Shuttleworth were building new hangars on the “private owners’ side” of the airfield, but they were not ready at the time of the move, so Kennet had to move into “temporary” facilities until the new facility became available. Though work was able to progress on ‘336 during this period in what we called “the potato shed” – a lovely old farm building which is now home to Kennet’s wing rebuilding unit – there were significant delays. Indeed it was not until 2018 that things started to move at a more desirable pace.

Kennet was then working on other projects, and remain so today. One of these aircraft includes Seafire F.Mk.XV SR462. There were obviously benefits to having two very similar Seafire projects on the go at the same time, but progress with ‘336 suffered in some ways, serving as a model for ‘462’s rebuild, just as ‘462 profited from having ‘336 there as a “model” to go by. [Editor’s note: Interestingly, when SR462 was under the ownership of Dr.Wes Stricker in Columbia, Missouri during the ‘early oughts’, the aircraft served as a model for the rebuild of another Seafire Mk.XV, this being PR503, which flew again in January, 2010]

Having said that, all was going well, and the hope was to have ‘336 back in the air for the 2020 air show season… however, we all know what happened then… Although Kennet was able to keep most of its team working at or near full time, the pandemic put the skids on all of our efforts, so we had to resort to Plans B, C, D, etc. In effect, Kennet slowed the process down to enable us to catch up on some other projects and give the rest of the fleet a little more TLC than it would otherwisehave received. Likewise, Kennet “owns” Boeing N2S-2 Kaydet Bu.3572 (N2JS), which had been based in the United States for several years. With the slowdown, we decided to bring “Juliet Sierra” over from the States and give her the same level of care to get her into the air (she was flying in the States, but not much) here in the UK, as with any other aircraft in the inventory. The T-6 (AT-6D 42-85068, G-KAMY) also received a significant “going over” as well, since she too has not been flying much of late.

Well, time marches on and like so many projects which appear to be “kits of bits” on a shelf, they come together quite quickly once all of the pieces are ready to go, and when the team has the “glue” to perform the assembly. There was no hurry to get her flying with what remained of this year since, however, as the air show season was already over and the winter months beckoned; indeed, it made little sense to fly her before March or April next year. But even so, there seemed little reason to keep her on the ground any longer, either. So with the last few good weather days of the year likely being upon us, we decided to go for it. As the saying goes… make hay while the sun is shining, right? And so we did. 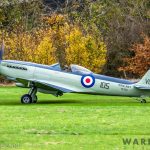 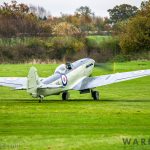 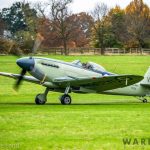 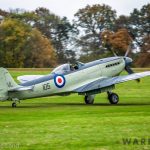 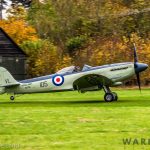 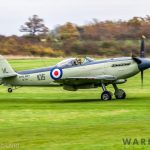 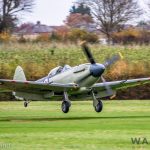 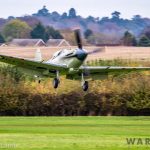 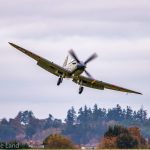 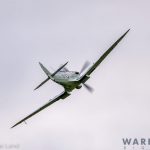 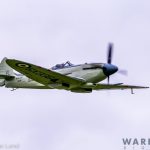 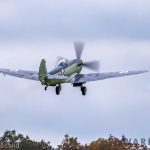 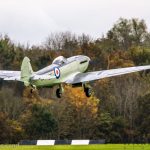 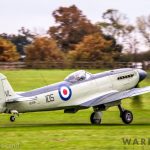 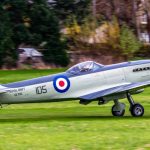 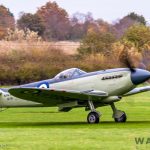 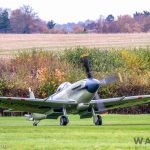 Many thanks indeed to Tim Manna for his extensive report on SX336’s return to the skies, and to George Land for providing the marvelous images of Stu Goldspink’s first post-restoration flight in the aircraft. We look forwards to reporting further exciting details about this aircraft in the coming year!